The race commenced at Tugun Beach with the weather being as described nothing less then dismal. Racing started with rain, wind and big average surf of 2meters, with some bigger sets rolling through over two banks. Combined with 7 second wave intervals, conditions were made even harder to race.

Alastair McGregor and Jason Brown raced first up in the open surf, with a good start. Only then to be halted as they punch through a big wave, filling the boat like a bath tub, and the motor choking and spluttering for about 10 seconds. This pushed them to last position. They continued on, getting through the race and crawling back a few positions, before a sand bank slowed them - almost bringing them to a complete stop. They overcame this obstacle, with a quick sprint finish up the beach and just missing out on making to the next round.

After a few more races having been run, with multiple boat flips by other clubs, the carnival was cancelled for the day. The team took this opportunity to get together and have some bonding time with a Team BBQ.

The next day the carnival was moved to Bilinga Beach, a few kms south of Tugun, to seek some protection from the conditions. At the start of the day’s racing it seemed ok, but then turned bad again.

Caleb Thomas and David Corin (David being new to the team this season) took on the big surf and managed to finish the race unscathed.

Next up was Caleb with Toby Andrews - battling it out in the under 23’s. They were on fire! Making out to the cans first, to then hit a big wave, forcing them to retire from the race with a broken tiller arm. Mooloolaba team in the lane beside them suffered the same fate off the same wave! You would never in a million years think that would happen.

A quick motor change and the team was back in action ready to race again. Watching the IRBs race across the water was like watching a mob of Kangaroos bounding skywards as they leaped over the waves. It looked impressive to say the least.

Alastair and Jason raced again in the old boys 45+ category, giving the other clubs a run for their money. Close racing as always, but no podium finish.

The carnival was then again cancelled, due to bad weather. The team is looking forward to the next carnival being held at Broadbeach on 4th & 5th June, then at Mooloolaba on 18th & 19th June. So keep the Mooloolaba dates free and come and see what makes this sport so exciting!

Thanks to Sharlene Swan and Alison Smithies as officials, Leah Henshaw team Manager and Chris Smithies as team coach for braving the weather with the rest of team. 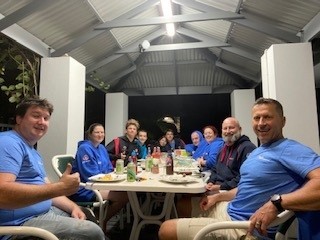